The Best Places to Stay in Fell’s Point

If you’re planning a trip to Baltimore, there’s no place more charming to stay than historic Fell’s Point. These are your 5 best options:

The 1914-built “Rec Pier” has served many roles over the years, but in 2017 it was restored and reopened as a 128-room boutique hotel. Owned in part by Under Armour Founder Kevin Plank’s “Sagamore” company and operated in partnership with the “Pendry” hotel brand, this lavishly designed property  pays tribute to its industrial and maritime roots while incorporating amazing modern amenities such as a waterfront pool. (PendryHotels.com)

Make yourself at home in this historic, award-winning property with a waterfront balcony overlooking Broadway Pier. This luxury home perfectly balances social space and privacy in the heart of the Fell’s Point, serving as a family home for groups of family, friends, and co-workers.(WaterfrontGem.com)

Originally built in 1900 as “The Anchorage”, this former Christian boarding house grew to encompass 7-adjoining buildings, became a Seamen’s YMCA, and enjoyed a stint as a Vinegar bottling factory before being renovated into the Admiral Fell Inn in 1985.

The Admiral Fell Inn occupies a beautiful corner where Broadway Square meets Thames Street at the foot of Fell’s Point. It’s central location and affordable rates make it an ideal location for travelers of all types. (AdmiralFell.com)

(4) The Inn at Henderson’s Wharf

Just one block from all the hustle and bustle, The Inn at Henderon’s Wharf enjoys a breezy waterfront location at the end of a quiet residential side street. The guest rooms are on the 1st floor of this former tobacco factory with permanent residences located on floors 2 to 6. (HendersonsWharf.com)

Although a new Baltimore City law has greatly restricted who may offer short-term rentals in Fell’s Point, there are still lots of legally operating options. Airbnb is a great solution for folks traveling in groups who want to feel more at home while they’re traveling. (Airbnb.com)

If you’re open to staying outside Fell’s Point’s boundaries and want more of a big-city vibe, consider finding a room in nearby Harbor East. This modern and chic area is just west of Fell’s Point and filled with skyscrapers, office buildings, upscale shops, and (you guessed it) … hotels!

Our two favorites are the Four Seasons for an upscale stay and Homewood Suites for convenience and value. 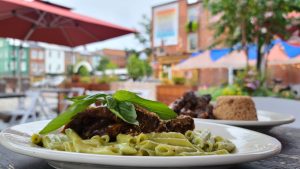